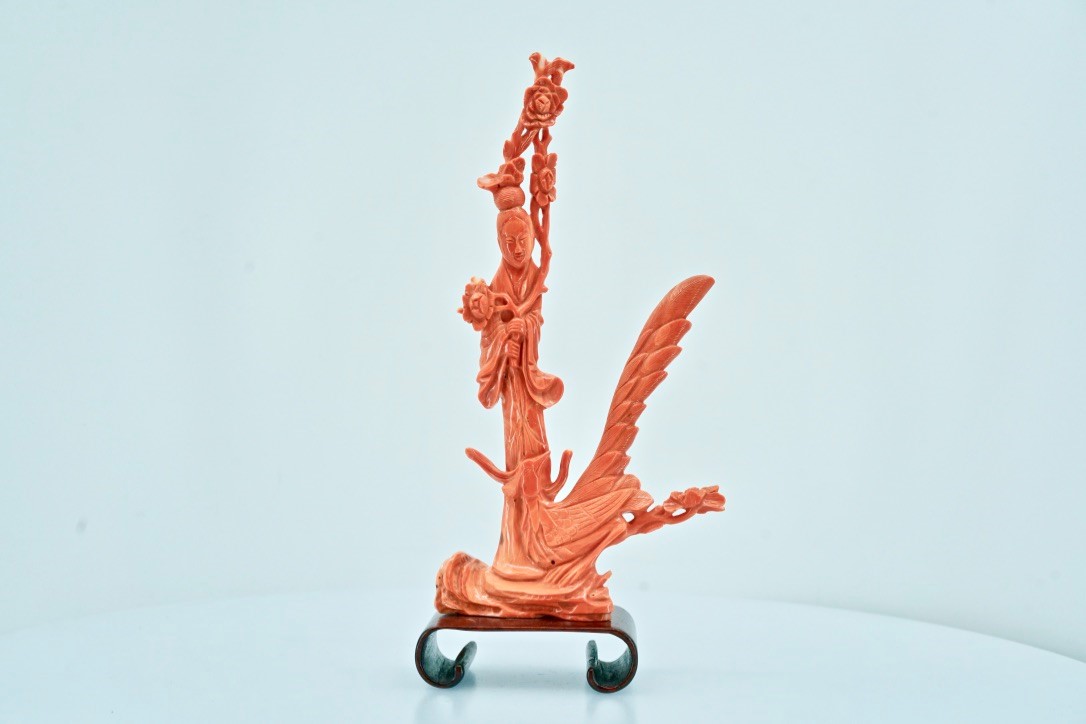 One of the upcoming highlights at YKLM Auction’s inaugural live sale on September 24th is this intricate red coral carving depicting a maiden and phoenix group.

Dated to the late Qing Dynasty and standing 22 cm high, the skilled artist uses the natural shape of a natural coral sprig to create this carving.

Red coral has a long history in Chinese culture and tradition. While carvings involving this material started appearing during the Tang Dynasty (618-907), coral beads were used to enhance jewellery, textiles and ornaments from as early as the Han Dynasty (206 B.C. – A.D. 220).

Coral was considered a precious commodity due to its intense red colour and scarcity. In Chinese art, it was often associated as one of the ‘babao’ (八宝), the ‘eight treasures’, and used to adorn the clothes of nobles and high ranking officials.

This material has many auspicious connotations as well. Deer symbolizes longevity in Chinese culture, and coral’s resemblance to deer antlers consequently exudes a long life to its owner.

The current carving also contains multiple beneficial meanings and was probably meant to be a gift for a woman of significance. The female figure is most likely a heavenly deity, and she holds onto a large branch of peonies with a mythical phoenix by her side.

Peonies symbolize female virtues such as beauty, grace, and wealth, while a phoenix can represent the empress, nobility, success and peace.

This coral carving was sourced from a local Vancouver collector and carries an estimate of $3000-$4000.

Re-visit the YKLM News section to see more Object Spotlights for our upcoming live auction on September 24. Previews will be held in our Richmond gallery at Lipont Place, 4211 No. 3 Road from September 20-23rd.

Based in Toronto, Anthony Wu is an Asian Art advisor, researcher, and writer. He is a certified Chinese Fine Art appraiser with the Appraisers Association of America (AAA) and a board member with the Canadian Association of Personal Property Appraisers.

5 Ways to Start Your Own Asian Contemporary Art Collection